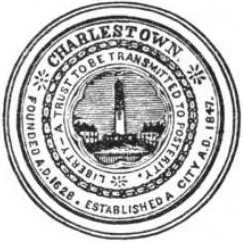 The Town of Charlestown was incorporated in 1628, 2 years before Boston.  It was the site of one of the early battles of the American Revolution, the Battle of Bunker Hill, which was fought on the 17th of June 1775.  It was later home to the Charlestown Navy Yard.  In 1847 it became a city, and in 1874 it became a part of the City of Boston along with Brighton and West Roxbury.

Other Government Documents on Charlestown

This is by no means an exhaustive list of government information available on Charlestown.  The Boston Redevelopment Authority produced many materials on the reuse of the Charlestown Navy Yard alone.  These materials are meant to provide a basic snapshot of Charlestown.

Charlestown (Boston 200)- an oral history done in conjunction with the nation's bicentennial.

The following books are on the history of Charlestown generally.  There have been many books on the burning of the Ursuline Convent.  Some of those materials can be found through a catalogue search for "Ursuline Convent Charlestown."