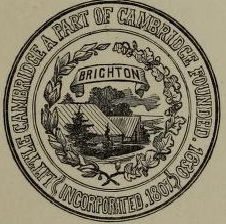 Settled in 1630, Brighton was a part of the Town of Cambridge until its incorporation in 1807.  Eventually the cattle industry became prominent, with the Brighton Stock Yards and Brighton Abattoir providing beef to the Boston area.  In 1874 it was annexed to the City of Boston along with Charlestown and West Roxbury.

Treasurer's Report of the Receipts and Expenditures of the Town of Brighton for the Year Ending...

Auditors' Report for the Town of Brighton ... for the Year Ending... (not available for digitizing)

Official Reports of the Town of Brighton for the Year Ending...

The public library of the Town of Brighton was established in part due to a bequest of James Holton, a prominent resident of the town.  The library was named in his honor.  When Brighton became a part of Boston, the Holton Library became a part of the Boston Public Library.

This is by no means an exhaustive list of government information available on Brighton or Allston.

Brighton (Boston 200)- an oral history done in conjunction with the nation's bicentennial.