A guide to resources concerning the Salem Witch Trials at the BPL and beyond.

"What do you laugh at it?
Well I may at such folly.
Is this folly? The hurt of these persons.
I never hurt man woman or child."
- From the Examination of Susannah Martin

"How long have ye been in the snare of the devil?
I know nothing of it."
-From the Examination of Mary Parker

"[He] owned to the grand Inquest that the above written Confession was taken from his mouth and that he had [said] it, but he [said] he belyed himselfe, he also [said]…he knew he should dye for it whether he ownd it or no."
-From Samuel Wardwell’s recantation of his forced confession

"My opinion is they are in a sad condition."
-Wilmot Redd

"I am an innocent person: I never had to do with Witchcraft since I was born. I am a Gospel Woman."
-Martha Corey

"I never did hurt them.
It is your appearance hurts them, they charge you; tell us what you have done.
I have done nothing to damage them."
-From the Examination of Giles Corey

"The innocency of our Case with the Enmity of our Accusers and our Judges, and Jury, whom nothing but our Innocent Blood will serve their turn, having Condemned us already before our Tryals, being so much incensed and engaged against us by the Devil, makes us bold to Beg and Implore your Favourable Assistance of this our Humble Petition to his Excellency, That if it be possible our Innocent Blood may be spared, which undoubtedly otherwise will be shed, if the Lord doth not mercifully step in."
-John Proctor

"I know nothing of it. I am innocent to a Witch. I know not what a Witch is."
-Bridget Bishop

"Mary Warren Charges you with Several acts off witchcraft; what Say you to it Guilty or not Guilty
I am not Guilty.
You told her this day you cast away Thomas Westgate
I know nothing of it
You told her John [Lapthons] was [lost] in [illegible]
I never spoke a word to her in my Life."
-From the Examination of Alice Parker

"Dear Child, it is not so. There is another judgement, dear child."
-Elizabeth Proctor

"[Sir] I cannot confess that which I do not know."
-John Willard

"...and the petition'r having lived from his childhood under the Same roofe w'th his said Mother he dare presume to affirme that he never saw nor knew any Evill nor Sinfull practice wherein there was any Show of Impiety nor witchcraft by her"
- from Petition of Thomas Hart, son of Elizabeth Hart

"I am as clear as the child unborn."
-Rebecca Nurse

"...my Wife declared to the Justices, that she never had any knowledge of them before that day; she was forced to stand with her Arms stretched out. I did request that I might hold one of her hands, but it was denied me; then she desired me to wipe the Tears from her Eyes, and the Sweat from her Face, which I did; then she desired she might lean her self on me, saying, she should faint."
- Nathaniel Cary, husband of Elizabeth Cary

While the hysteria had it's roots in Salem Village and Salem Town, more and more villages and towns became "afflicted" as time went on: 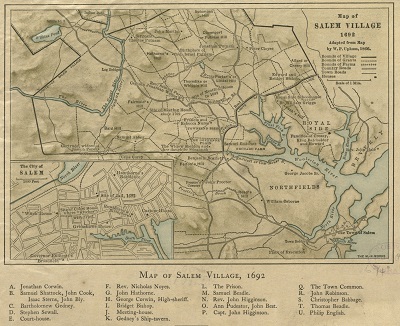 In January of 2016, a group of scholars forming the Gallows Hill Project at Salem State University announced that they had determined the location of the executions of the 19 people that were hung during the trials. Known as Proctor’s Ledge, the site was a rocky ledge on the lower slope of Gallow’s Hill, bordered by Proctor and Pope Streets in Salem. The area had been suspected to be the execution site for many years.

A memorial to the executed was constructed on the hill and formally dedicated on July 19, 2017, the 325th anniversary of the executions of Rebecca Nurse, Sarah Good, Elizabeth Howe, Susannah Martin, and Sarah Wildes. 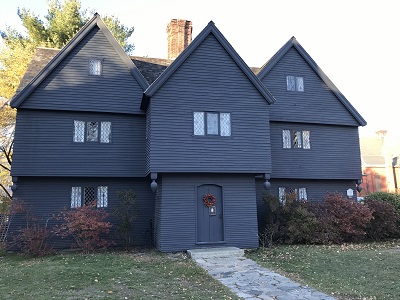 The so-called “Witch House” was the home of Jonathan Corwin, who served as a judge during the trials, from 1675 until his death in 1718. Contrary to the name and popular rumor, there is no evidence that any of the accused witches were ever brought to the house for questioning or trial. It is the only building still standing in Salem with direct ties to the trials. 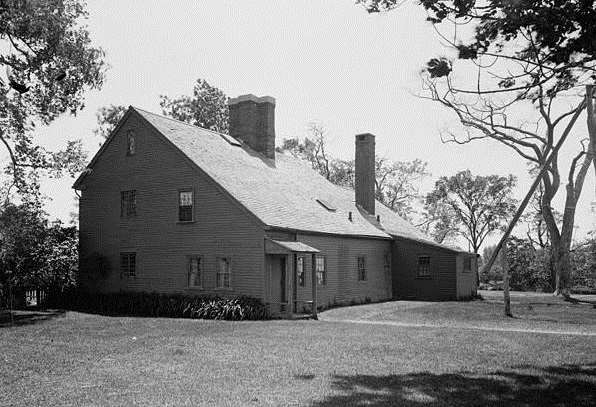 Located in what is now Danvers, Massachusetts. Nurse’s family supposedly secretly took her body there after her execution in order to give her a proper burial. 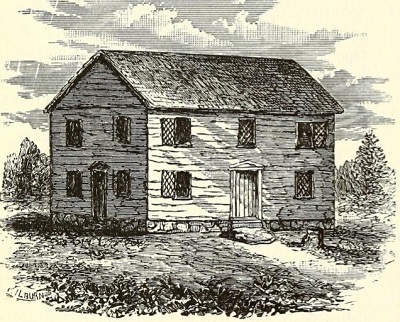 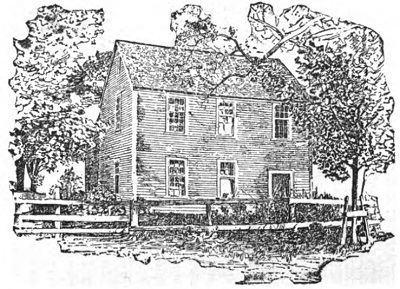 The foundations of the Salem Village parsonage, where the Parris family lived during the hysteria, were discovered during an excavation of the site in 1970. The exposed foundations are accessible via a cart path behind 76 Centre Street in Danvers.

Image Credit:
Addition to Salem Village Parsonage built after Parris’ departure
Excerpt from “Witchcraft in Salem Village in 1692 : together with some account of other witchcraft prosecutions in New England and elsewhere" by Winfield S. Nevins, 1892

Salem Village- From the National Park Service's "Places Where Women Made History" guide.