The BPL’s early manuscripts collection is a major resource for the study of history, art, and communication during the Middle Ages and Renaissance in Europe. The collection is rich in liturgical and devotional works, legal documents, classical Latin and Greek texts, works of philosophy, science, geography, and a variety of other subjects and genres.

Officially known as the BPL Medieval and Early Renaissance Manuscripts Collection, holdings are not strictly limited by standard periodization. Certain later manuscripts, which continue earlier traditions of scribal practice or illumination, are also included, as are a select number of later manuscripts with close associations to materials at the core of the collections.

Image: (at top) detail from a decorated border of BPL MS pb Med.206 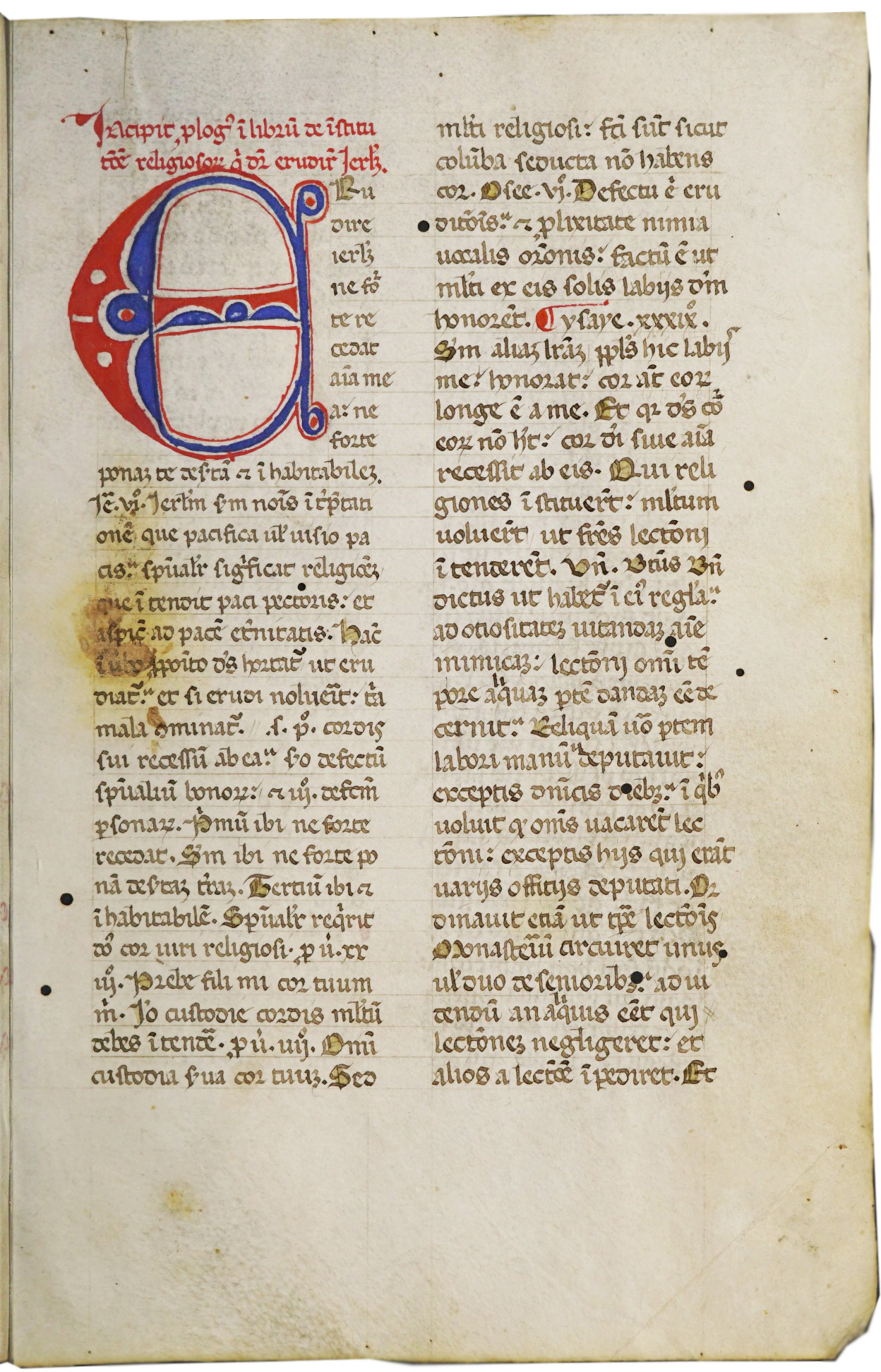 Over the course of the mid- to late 19th century, the library acquired a small handful of early manuscripts through bequests and occasional purchases. The first medieval manuscript acquired by the library -- a 1380 copy of William Perault's De institutione religiosorum -- was bequeathed by Theodore Parker in 1861 (click image at right for details). Three further manuscripts (MS f Med. 3/MS f Med. 4, MS f Med. 17, and MS f Med. 261) were purchased at the 1878 sale of books from the library of Joachim Guerrini, O.F.M.

The true nucleus of the collection, however, was formed in 1901, with the acquisition of twenty items from the sale of the library of the Earl of Ashburnham, purchased for the BPL in London by Sydney Cockerell. By 1928, the number of manuscripts in the collection had grown to 40. However, progress toward more broadly representative holdings remained slow. In an article published that year in More Books, Zoltan Haraszti, who would later become Keeper of BPL Rare Books and Manuscripts, wrote:

The library is lacking in medieval manuscripts of the first rank ... perhaps eight or ten have a special value, and even these fall short of the best specimens of the art. Rich as the library is in other fields, there is no need to conceal its comparative poverty in manuscripts. Only by frank admission can the situation be amended.

Beginning in 1929, Haraszti sought to build a comprehensive specimen collection of script and illumination. By 1951, the size of the collection had doubled. Over the same period, many of the most significant manuscripts in the collection were acquired.

Haraszti retired in 1962, by which time the pace of acquisition had slowed substantially. Over the following years, the library focused more heavily on the purchase of distinguished fragments and individual leaves, and, when available, on interesting bound manuscripts.

As of 2021, the collection has grown to encompass 242 items (160 bound volumes and 82 leaves, fragments, or single-sheet manuscripts).

Throughout its various collections, the library holds many thousands of manuscripts. Exactly which of these are included in the Medieval and Early Renaissance Manuscripts Collection, as it exists today, was in many cases determined by a departmental reclassification project that began in 1968.* Prior to that date, early manuscripts had generally been spread throughout the BPL's special collections and were organized variously by topic, provenance, or even date of acquisition. The 1968 reclassification of medieval and renaissance manuscripts, in particular, sought to mirror organization of BPL holdings listed in Seymour de Ricci's Census of Medieval and Renaissance Manuscripts in North America, and in the 1962 Supplement to de Ricci's work, by William Bond. 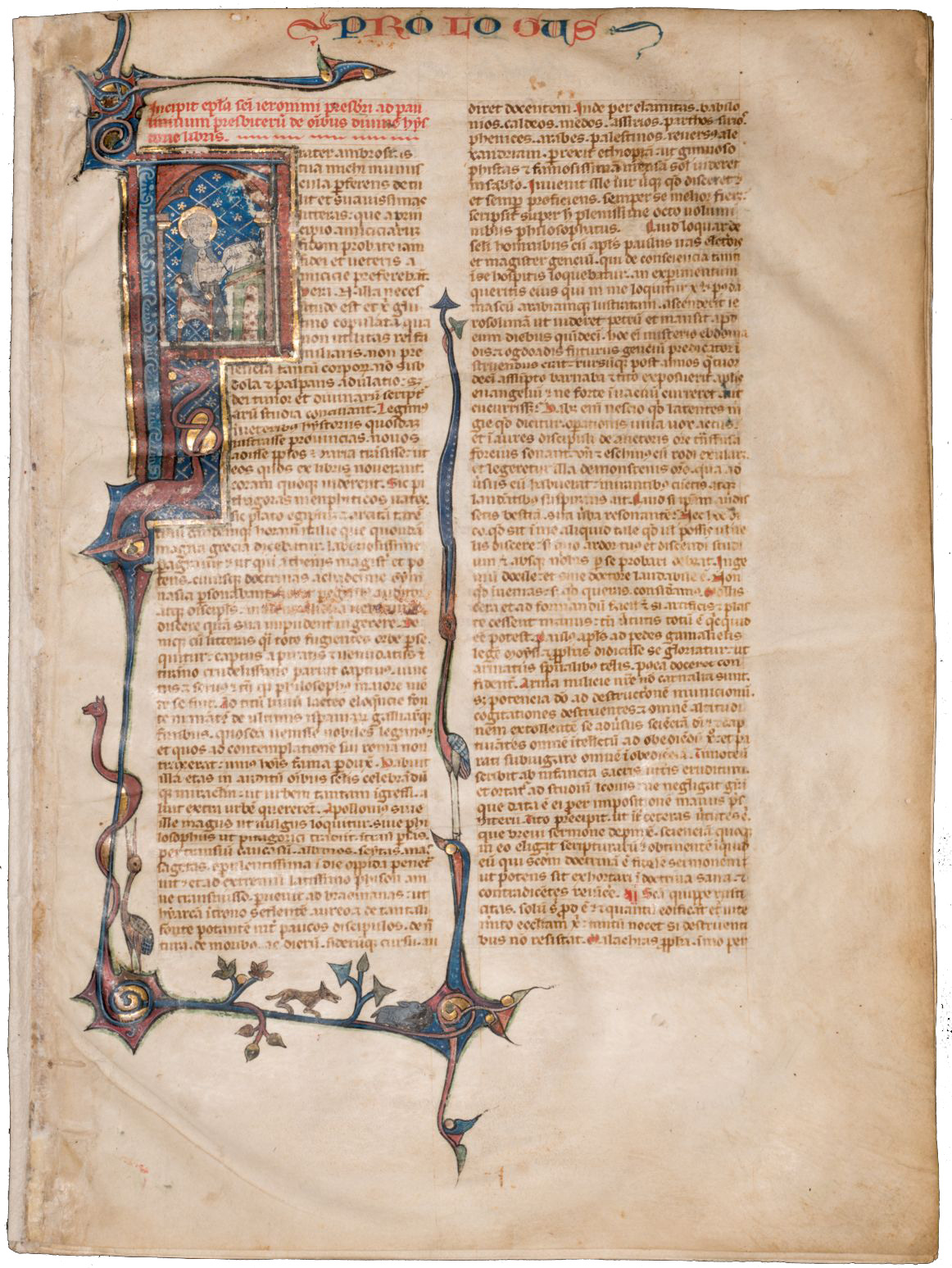 Under the new system, medieval and renaissance manuscripts held in previously disparate parts of the collection were brought together and renumbered. The new numbering system followed the order in which the manuscripts had been listed in the de Ricci and Bond censuses. Each manuscript was further classified according to size ("MS pf" for portfolios, "MS f" for folios, "MS q" for quartos, and later, "MS pb" for single-sheet manuscripts and leaves). The suffix "Med." was added to denote the collection itself. Thus, the first item listed in de Ricci -- a 13th-century folio Bible formerly classed as G.401.11 -- became MS f Med. 1. The 33rd BPL manuscript listed in de Ricci -- a 15th-century Flemish book of hours formerly classed G.408.85 -- became MS q Med. 33, while an illustrated life of St. Augustine, listed as number 77 in Bond's Supplement and formerly shelved as BPL MS 1483, became MS f Med. 77.

While the new system facilitated more efficient shelving and retrieval of manuscripts, it created significant ambiguities. In faithfully following de Ricci's numbering of BPL holdings, curators classed with the collection no fewer than 30 autographed documents (de Ricci BPL numbers 42-72) contained in the Chamberlain collection of manuscripts. Most of these documents date from the 16th through mid-17th centuries and are indistinguishable in content and type from many other manuscripts held elsewhere within the BPL's manuscript collections. As of 2019, the majority of these documents are not considered to be part of the Medieval and Early Renaissance Manuscripts Collection.

After the reclassification of 1968 had been completed, each newly acquired manuscript was given the next available number. As of October, 2021, the highest number in the collection is MS q Med. 284.

Fragments in other collections

Many bindings held within BPL rare books collections contain fragments of early manuscripts that were cut up and re-used as raw materials by bookbinders. Book historians generally refer to these kinds of reused pieces of manuscripts as "binder's waste," or, more specifically, "manuscript waste."

Bookbinders used manuscript waste in a variety of ways. Pages of manuscripts on parchment were often sliced into thin strips and repurposed as sewing supports and spine linings. Full leaves and bifolia were also frequently cut out of manuscripts and used as pastedowns or as covers.

Though not necessarily included in the Medieval and Early Renaissance Manuscripts Collection, those waste fragments that have so far been identified can be retrieved through either of the online catalogs, using the following advanced search: