This guide will provide an overview of resources useful in researching street and place names in Boston.

Some of the most common types of name origins are the following:

Another city/town or other place
i.e. Boston was named after Boston in Lincolnshire, England, the place from which some of the original settlers came.

An important business or institution that was/is in the area
i.e. Old Colony Ave, named after Old Colony Railroad which used to run nearby

A nearby geographical feature, either natural or man-made
i.e. Tremont Street, a shortened form of the word Trimountaine, which was a reference to the three peaks that once constituted Beacon Hill. Before being officially named Boston, the original settlers of the area called it Trimountaine. The peaks were removed to use as landfill in various land development projects in the 19th century.

A public figure who may or may not have been from or lived in the area
i.e. Martin Luther King, Jr. Blvd, named shortly after he was assassinated 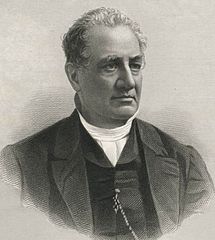 A person who was important to a nearby institution
i.e. Blagden Street, likely named after early supporter of the BPL George Washington Blagden (who was also the pastor of Old South Church from 1836-1872.)

Native American words or place names
i.e. Nonantum Road in Brighton, from an Algonquian word meaning “the place of rejoicing.”

The streets in Back Bay from Arlington to Kilmarnock (skipping Massachusetts Ave) were named for lordships or earldoms in England. 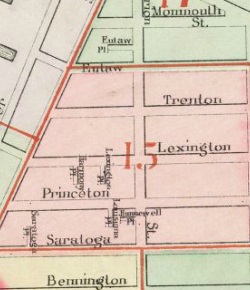 The City of Boston has never kept records regarding the origins of street/place names nor have they kept records for the reasons for any changes of these names. This guide will give a brief overview of the resources one can use to try to determine the origin of a particular street or other named place in Boston.

Unless otherwise noted, all books referred to on this page can be requested in hard copy at the Research Services desk on the second floor of the Central Library in Copley Square.

Hero Squares, or Memorial Squares, are intersections that have been named in honor of a person, usually a fallen soldier or first responder. There are nearly 2,000 such squares in Boston. These squares are designated by some kind of marker or plaque, many will contain only the person’s name while others will have more information. Squares are usually located close to where the person it is named after was from. In the years following both World Wars the practice of naming squares after fallen soldiers from Boston was especially popular.

An official street listing published in 1955 contains a listing of all the squares named for soldiers who fought in the World Wars that had been dedicated up to that time.
Online Version

The City of Boston began an initiative in 2013 to re-label all of the squares with more information about who they were named for. They have provided a database of all the known Hero squares which can be searched via the link below. All of the entries include maps, and some will contain biographical information.
CityofBoston.gov- Hero Squares

For squares that do not yet have biographical information gathered by the city, searching for the name in one our Boston newspaper databases may be able to turn up a death notice that will give an indication of when the person died and possibly an article about the dedication of the square.

Streets that No Longer Exist

In addition to the other resources mentioned on this page, maps can be useful tools in determining the former locations of streets that no longer exist:

Mapjunction- allows you to compare and contrast historical maps with more recent satellite images of Boston.
Norman B. Leventhal Map Center- a digitized collection of maps held by the Map Center at the BPL, can be browsed by date and location
Atlascope- From the Map Center, a tool for exploring historic urban maps in metropolitan Boston
Boston Planning and Development Agency- a collection of historical maps, some of which are related to various redevelopment projects
Massachusetts Real Estate Atlas Digitization Project- a collection of real estate maps digitized by the State Library of Massachusetts.

Various development projects in Boston’s history have led to the removal of many streets. Two  examples of entire street groupings being removed for development are the removal of most of the so-called New York Streets in the South End in order to construct the Ink Block, and the demolition of much of the West End to make way for City Hall Plaza and other buildings.

The New York Streets in the South End ran between Albany Street and Harrison Avenue, and were named after the cities along the Erie Canal in New York State. From north to south, they were: Seneca, Oneida, Oswego, Genesee, Rochester and Troy Streets.

Seneca, Oneida, Oswego, Genesee, and Rochester Streets were demolished in the 1950s as part of the construction of the Ink Block, which consisted primarily of the headquarters of the Boston Herald-Traveler newspaper along with apartment buildings, mixed-use buildings, and retail stores. Troy Street, which escaped demolition, was re-named Traveler Street.

During the controversial redevelopment projects that demolished much of the West End in the 1950s and 60s, several streets were either shortened or eliminated altogether. Among the eliminated streets were Allen Street, Chambers Street, and Leverett Street.

Once in a while, the naming or re-naming of a street or place is considered important enough to be reported on. There may also have been an article relating the street or place long after it was named that contains information about the origin of the name. The BPL has access to several newspapers as well as a large collection of old newspapers on microfilm. You can learn more about our newspaper collection in the research guide linked to below. 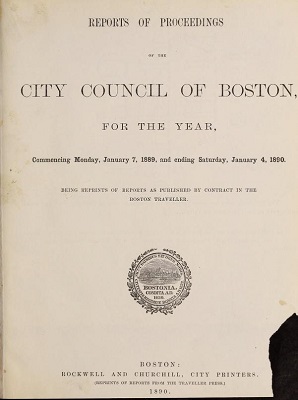 Anything to do with the naming or re-naming of a street or named place in Boston has to be approved by the city council. The city council proceedings then are a good source for finding information about streets and places. Each volume has an alphabetical index in the front, information about a street or place can be found either under the name itself or under an entry for a related department (i.e. Street laying out department.) Occasionally, these entries will note who or what a street or place is being named after. However this is not always the case.

The BPL holds published city council proceedings dating back to 1868, with some gaps. 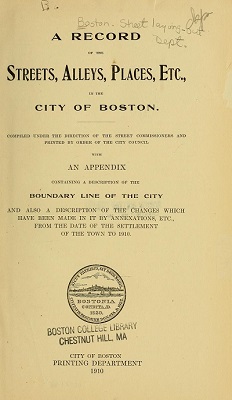 Published by the Boston Street Laying-Out Department in 1910, this book offers a thorough history of most streets and named places in Boston at the time of publication. This can be useful in terms of figuring out when a street was named or re-named so that one can then figure out which sources might have further information. The book also contains a facsimile of a 1702 public notice listing all of the then-existing named streets in Boston, along with descriptions of where they were. 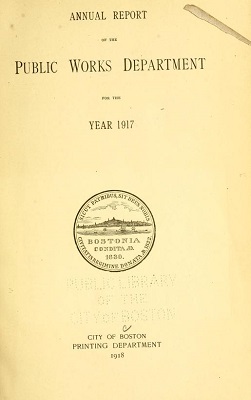 The Street Department, and later the Public Works Department, would have been responsible for the laying out of and other maintenance of streets and public places. These annual reports may contain information about when streets were laid out or altered. 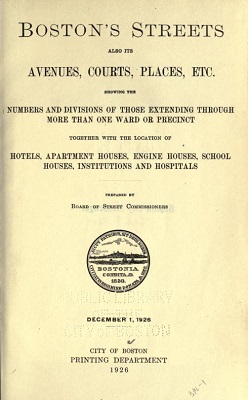 Street listings were re-issued whenever boundary lines changed. These books can be useful in locating streets, places, hero squares, and various institutions. 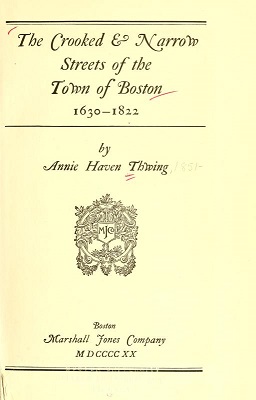 Written by local historian Annie Haven Thwing, this book is a narrative history of the streets of Boston from the time it was first settled up to 1822. It also includes numerous maps showing the layout of streets in various neighborhoods. 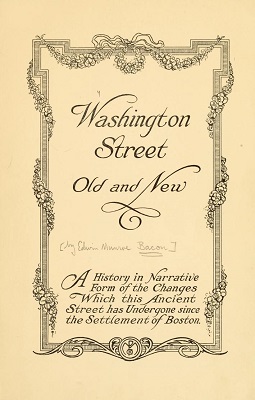 Occasionally, streets will be considered noteworthy enough to have their own history written and published. Below is a link to our catalog with a few such books held by the BPL.